For Spirited Away pictures/wallpapers press the logo below. 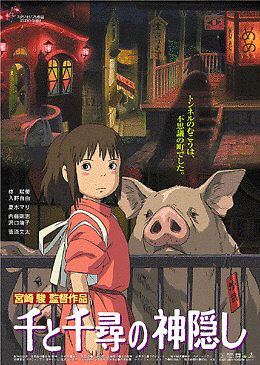 This is a great and beautiful movie with a great story and spectacular image and sound.

Winner of several deserved awards around the globe it tells the story of Chihiro, a young girl lost in a spirit world trying to save her parents from turning into pork chops for gods.

Sen to Chihiro no Kamikakushi is a fantasy adventure with a ten year-old girl, which starts in everyday Japan but goes somewhere very different.

For young Chihiro and her family, a mysterious tunnel and haunted town lead to the Land of Spirits, inhabited by gods and monsters and ruled by the greedy witch Yu-baba.  Chihiro‘s parents are transformed into pigs; to rescue them, she must surrender her name and serve in this world. Luckily she finds friends and allies, including the handsome but mysterious boy Haku.  Initially sulky and listless, Chihiro (or Sen, as she‘s now called) finds inner strengths and establishes an identity in this strange world.

But can she win back her name and return home?